How Just is the Just Transition?

This blog reflects a community impact view, illustrated by the ongoing transition in Ireland.

Dr. Aparajita Banerjee, Postdoctoral Researcher with NexSys and Assoc. Prof. Geertje Schuitema, Funded Investigator with NexSys and academic in the UCD College of Business, reflecting on their research on Just Transition. This research included a lot of interaction with local communities impacted by the ongoing transition in the Irish Midlands.

The energy transition has impacts on communities as well as on power systems.

All these changes impact our society and have real implications for people, communities, and organizations. This benefits many, for example in the form of having a reliable energy supply, new business opportunities from new energy projects, or improved wellbeing.

However, as with all changes, there are also “losers”. Reducing fossil fuel used in energy production through phasing out subsidies, divestments, moratoria, bans, and litigations can affect the lives of people who have worked, lived, and raised their families depending on fossil fuel ancillary enterprises.

This results in the loss of jobs and livelihoods, changes in working conditions, skill obsolescence, and the ability to acquire future employment in a changing economy.In fact, some communities that were thriving in the carbon industry may be negatively impacted when entire industries disappear.

To ensure that the “losers” of the energy transition are not disproportionally affected by the energy transition, world leaders reaffirmed their commitments that climate change actions should synchronize with eradicating poverty, reducing inequalities, and achieving sustainable development.

This commitment is referred to as the “Just Transition”. Social justice, respect for human rights and protection of livelihoods provide the normative core to a just transition vision whereas rehabilitating workers, communities and regions affected by the closure of fossil fuel industries is roughly translated as just transition practice.

Given this, public funds are made available to achieve this, for example, by the European Union which recently created the Just Transition Fund as a new instrument of the region-wide Cohesion Policy 2021-2027 to support territories most affected by low carbon energy transition.

A Just Transition requires recognizing that workers’ rights and livelihoods are affected and that communities embedded in fossil fuel extraction regions may suffer heavily from job loss and reduced disposable income. Hence, the focus of a Just Transition is on rehabilitating workers and creating transformative social, economic, and environmental changes.

The end of peat: uncertain future and promises of a Just Transition

At the end of 2019, it was decided that the last two peat-fired power plants in the Irish Midlands would be closed by the end of 2020. The closure of the power plants, and the reduction of demand for peat, affect around 4000 jobs in one of the country’s poorest regions, resulting in an uncertain future for the workers, their families, and the communities.

Recognizing the imminent socioeconomic impacts of the closure, the Government of Ireland constituted a Just Transition Fund to support the region. We conducted semi-structured interviews and a community-wide survey to investigate how the workers and local communities perceived the peat industry’s imminent closure and how a Just Transition plan could benefit them. We focused on those involved with the Lough Ree Power Station in Lanesborough. 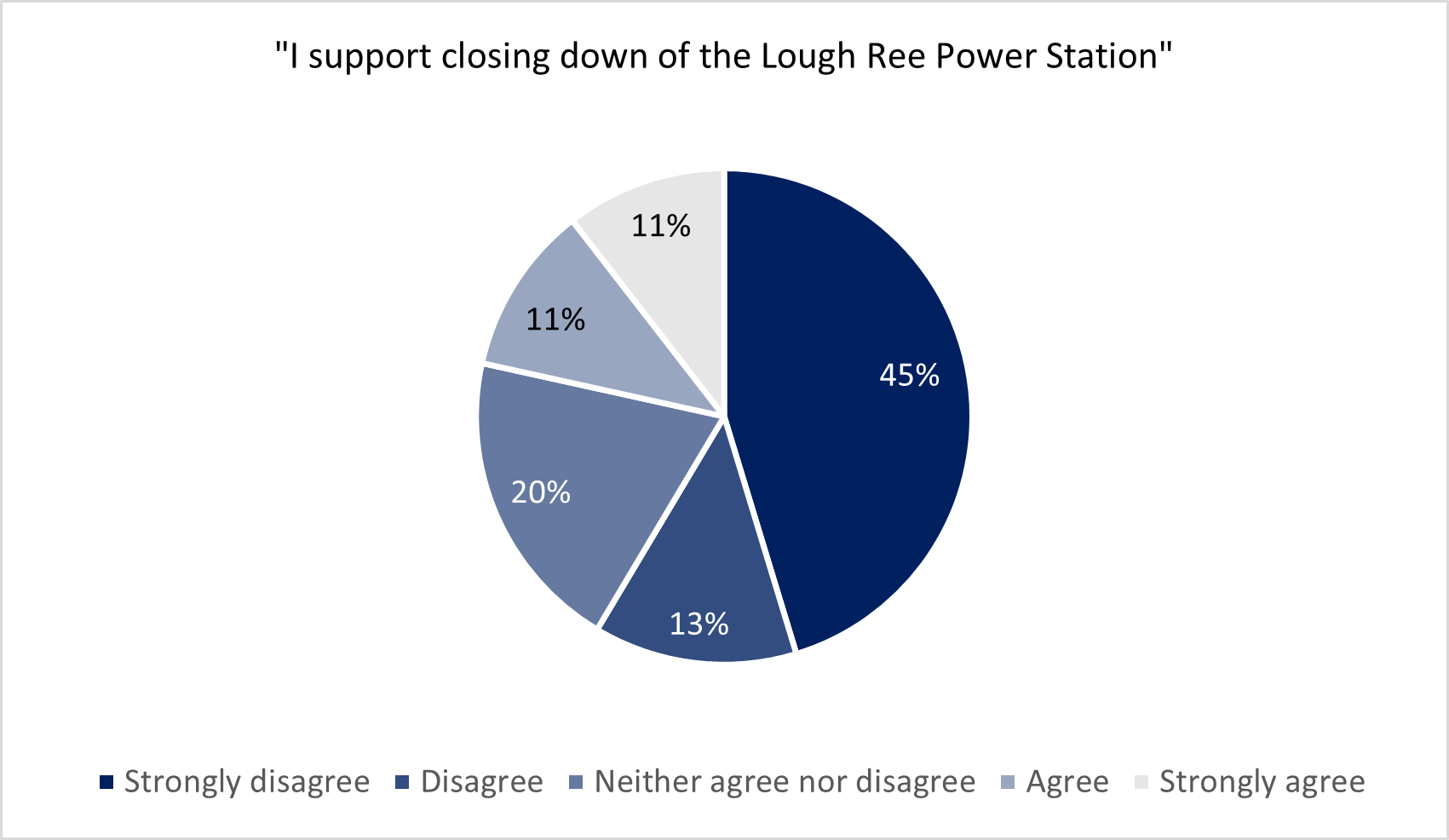 Source: Medugorac, V., Banerjee, A., & Schuitema, G. (2020). Ireland’s Just Transition – A report on the perceptions of impacted communities in Ireland. Available at: https://www.esipp.ie/post/irelands-just-transition-a-report-on-the-perceptions-of-impacted-communities-in-ireland.

Reskilling and upskilling programs were provided by the company, yet workers believed that these programmes often missed the point. For example, they offered skills training for skills they already had, or the new skills did not match locally available jobs. The in-person training programmes were also suspended during the pandemic and the workers were surviving on social welfare and their severance pays.

Facing an uncertain future, many planned to either commute to bigger cities daily for work or migrate to other regions. Such an increase in daily commute would increase local emissions and erode social contracts, leading to a feeling of reduced quality of life. Some feared the entire region would change into ‘towns seen in a Western movie when the gold rush went out with dust and tumbleweeds everywhere and the doors falling off.’ [Interviewee 020]. 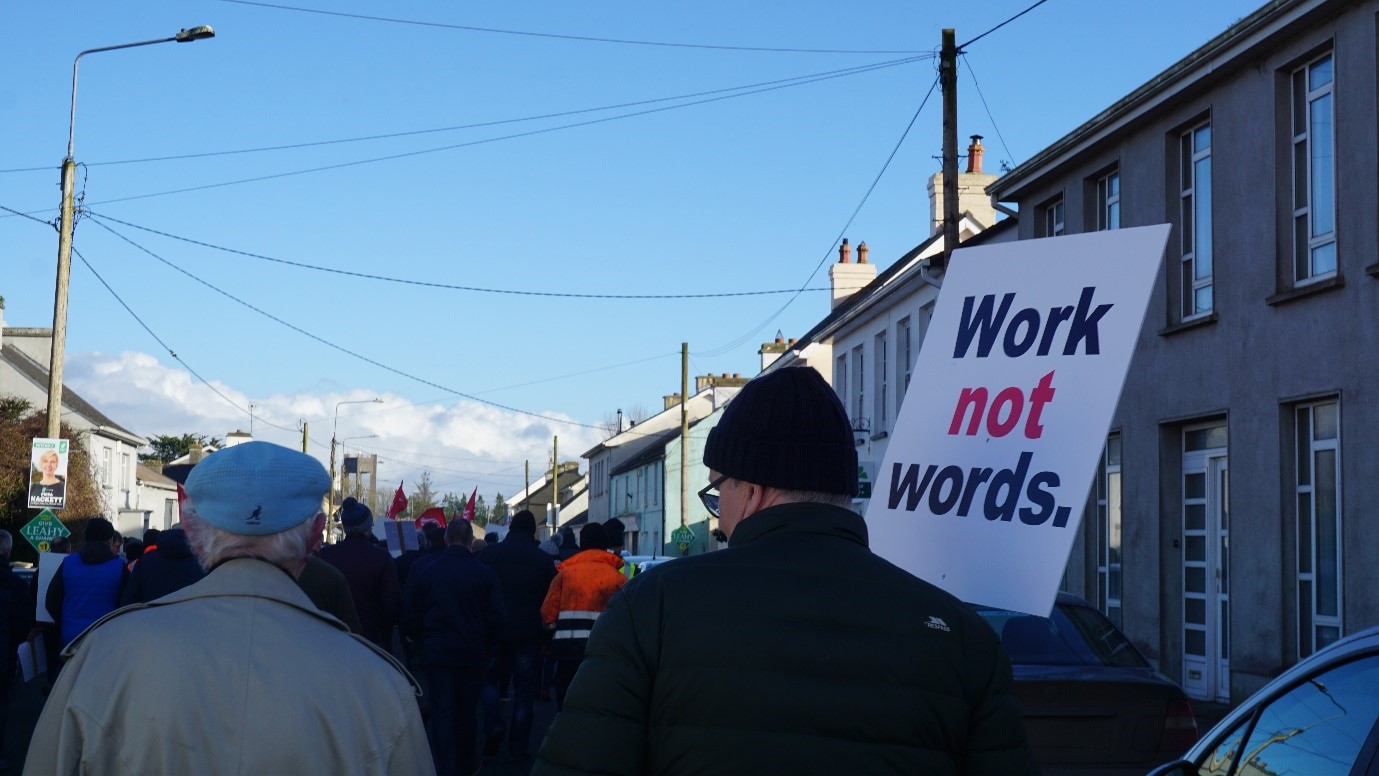 To avoid such a future, Ireland’s government allocated funds to the region to increase local employment opportunities through economic diversification. However, participants were apprehensive, as they reiterated the importance of engaging in social dialogue with the workers and the communities. Also, investments in the region would require years to rejuvenate local economies and there is no guarantee that those who lost their livelihoods would be benefitted by the government investments. Overall, they felt communities should be much more involved to ensure that investments would truly benefit the region. Instead, the Just Transition was often perceived as “paper talk”. 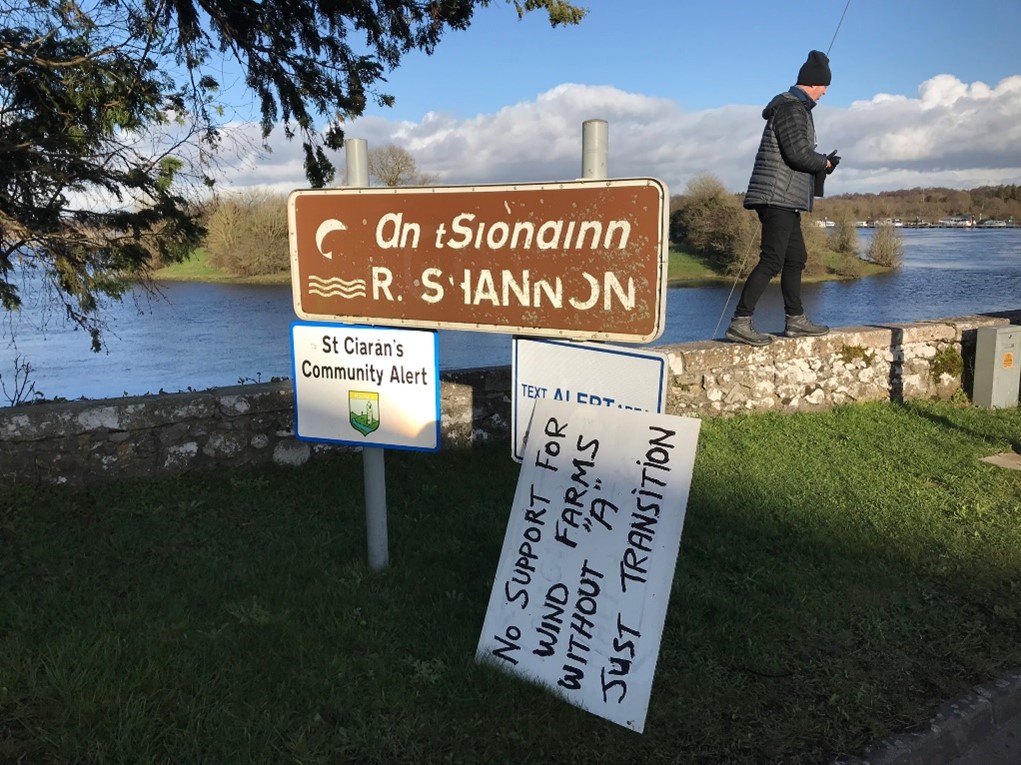 How just is the Just Transition?

The Irish Midlands do not stand alone. There are many similar regions around the world where fossil fuel extraction will eventually come to an end. Think for instance about communities in Central Appalachian regions of the US, hard coal mining regions in Germany or Australia, or the petroleum production in Mexico.

Though governments may readily commit to the Just Transition programs, their execution can be poor, lacking knowledge of the needs of local people, communities, and businesses.

A Just Transition should include dialoguing with people in developing a sustainable future for them, covering a broad perspective.

The planning should start long before the actual closure of businesses. Local economic opportunities should be pre-emptively promoted so that an alternative economy that can help communities to sustain themselves is created.

Lack of such long-term and broad thinking can affect society’s support for the energy transition, jeopardizing the chances of creating a just and more sustainable world. Therefore it’s in the general interest to ensure that a Just Transition is just that.

We use cookies on our website to give you the most relevant experience by remembering your preferences and repeat visits. By clicking “Accept All”, you consent to the use of ALL the cookies. However, you may visit "Cookie Settings" to provide a controlled consent.
Cookie SettingsAccept All
Manage consent

This website uses cookies to improve your experience while you navigate through the website. Out of these, the cookies that are categorized as necessary are stored on your browser as they are essential for the working of basic functionalities of the website. We also use third-party cookies that help us analyze and understand how you use this website. These cookies will be stored in your browser only with your consent. You also have the option to opt-out of these cookies. But opting out of some of these cookies may affect your browsing experience.
Necessary Always Enabled
Necessary cookies are absolutely essential for the website to function properly. These cookies ensure basic functionalities and security features of the website, anonymously.
Functional
Functional cookies help to perform certain functionalities like sharing the content of the website on social media platforms, collect feedbacks, and other third-party features.
Performance
Performance cookies are used to understand and analyze the key performance indexes of the website which helps in delivering a better user experience for the visitors.
Analytics
Analytical cookies are used to understand how visitors interact with the website. These cookies help provide information on metrics the number of visitors, bounce rate, traffic source, etc.
Advertisement
Advertisement cookies are used to provide visitors with relevant ads and marketing campaigns. These cookies track visitors across websites and collect information to provide customized ads.
Others
Other uncategorized cookies are those that are being analyzed and have not been classified into a category as yet.
SAVE & ACCEPT